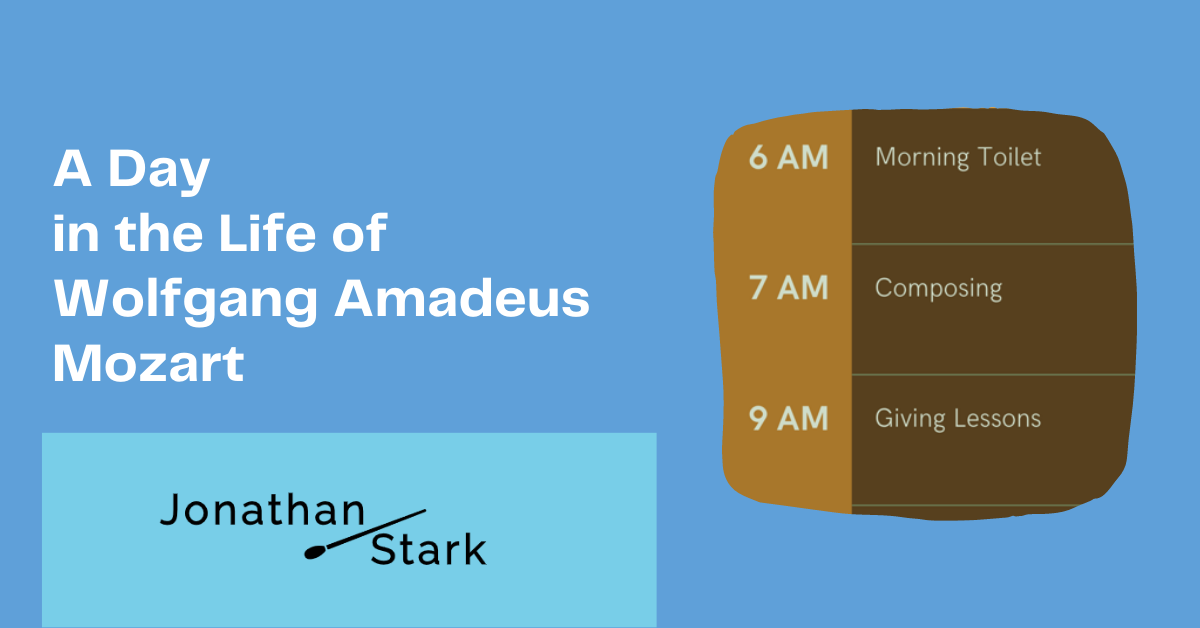 Mozart’s days were filled with an absurdly heavy workload. Combined with far too little rest and sleep time, it is hardly surprising that Mozart was in such poor physical shape throughout his life. Find out what a typical day in the life of Wolfgang Amadeus Mozart was like in this article.

Many Composers, One Problem

All composers faced and continue to face the same question: at what time of day is it possible to concentrate on composing for a few hours at a time?

After all, all composers, from Bach to Mozart, Beethoven and Tchaikovsky to Britten and Shostakovich, have one thing in common: each day had exactly 24 hours for all these great artists as well.

I know that sounds banal. But it is exciting to observe how each composer had to solve this “problem” in his own personal way.

This is particularly interesting in Mozart’s case. You’ll find out why in a moment – first take a look at Mozart’s typical daily routine:

This daily routine seems strange at first glance. When Mozart did not have to play a concert in the evening, he “cut up” his composing time into three parts: He composed in the morning, in the afternoon, and late in the evening.

According to Mozart’s own statement, he often composed late in the evening until 1 o’clock in the morning. With this information, you can add up the hours Mozart spent composing every day. 2 hours in the morning, 4 hours in the afternoon, 2 hours late at night…that’s 8 hours of pure composing time a day!

Yes, that’s a “normal” work day today, I know. But there are two things to keep in mind:

First, Mozart performed not only as a composer, but also as a pianist and conductor. So the corresponding practice time had to be accommodated somewhere as well.

Second, as you can see from the daily schedule, the remaining hours of the day were filled with other activities. In the morning, for example, Mozart taught private students for four hours! Why on earth?

This has to do with Mozart’s special professional status, which was very unusual in the mid-18th century….

Mozart was one of the first freelance composers ever. That didn’t exist in the mid-18th century. As a musician, one usually had a job, either at court or in the church. If you didn’t have a job, you didn’t become a musician. It was as simple as that.

But Mozart was different. He managed to get by without a permanent position – and, contrary to what is still widely believed, he was financially very successful for a long time.

This status as a freelance artist is the explanation for the other activities you can see in his daily schedule:

Mozart had to teach in order to earn a regular income. Furthermore, he was dependent on the favor of numerous “patrons” (today we would say “sponsors”), whom he had to keep happy accordingly. Therefore, he spent many hours a day away from home – for example, at lavish lunches (1 to 5 p.m…) and/or evening parties of the Viennese high society.

One looks in vain for periods of relaxation in Mozart’s daily routine. Even the noon appointments and evening parties were actually “work” – network maintenance, so to speak. Moreover, Mozart always had to keep these appointments himself and could not entrust them to his assistants, as he sometimes did with compositional tasks.

This is a clear difference to the daily routine of later composers: Beethoven, for example, liked to go to the pub in the evening to read the newspaper. Benjamin Britten used to take extensive afternoon walks and, of course, the typical British teatime.

At the beginning of the article I wrote that every composer must solve the problem of “too short days” in his own individual way. Mozart’s solution was conceivably radical: he hardly slept. This was obviously not ideal for his physical condition.