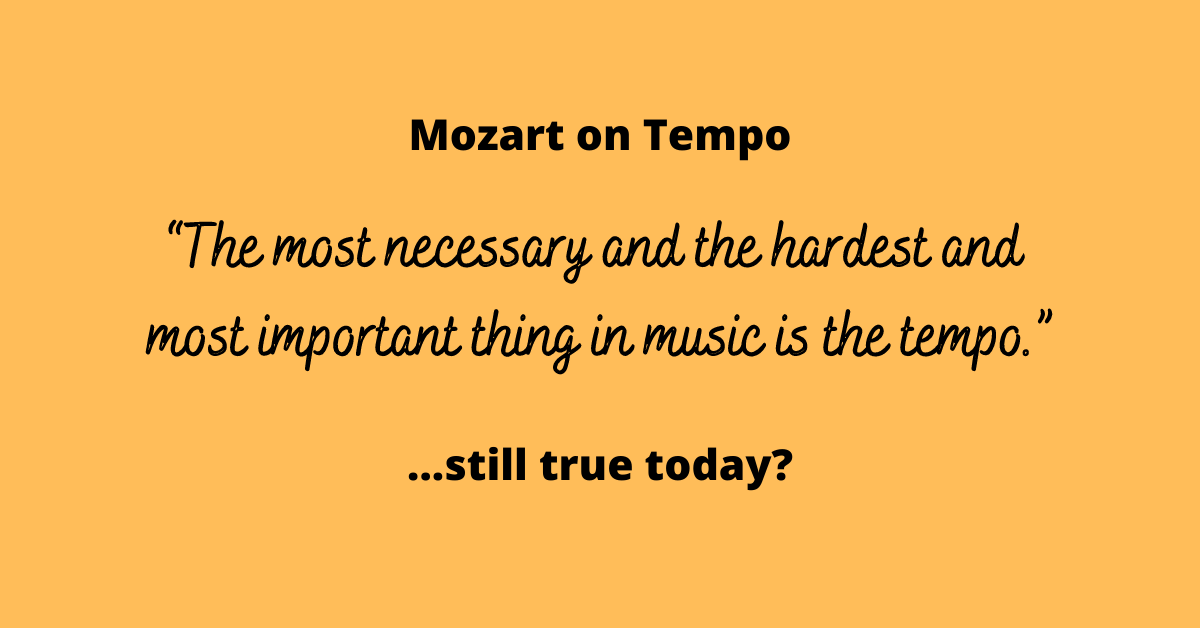 “The most necessary and the hardest and most important thing in music is the tempo.” Wolfgang Amadeus Mozart wrote this in 1777 in a letter to his father. Is it still true today?

Last week, together with Adrian, the Music Theory MentOWL, I took a closer look at the term tempo (click here for the article). But what do the world stars of classical music have to say about it? The following statement comes from a real world star – Mozart:

“The most necessary and the hardest and most important thing in music is the tempo.”

To interpret quotations is always a difficult thing. Especially when they are several centuries old. There is a large degree of consensus in today’s musical world about tempo being “the most necessary” and “the most important thing” in music. Tempo is undoubtedly one of the most powerful “adjusting screws” with which the character and effect of an entire piece of music can be controlled.

Problematic: Mozart’s statement is often shortened to that the tempo is “the hardest thing” in music. Accordingly, Mozart is often used as a key witness for the assumption that a tempo once chosen must be stubbornly maintained. But this view leaves one decisive point out of consideration: music-making practice, which has changed fundamentally over the course of time.

None of us will ever hear Mozart play the piano – but at least two things can be considered historically certain. First: When Mozart played the piano, it was a brilliant event. Second: Mozart was already famous for his rubato during his lifetime.

The rubato as a decisive tempo factor

Rubato is a playing practice in which the accompaniment remains strictly to the beat, but the melody voice takes great liberties by constantly running ahead or lagging behind. This high art went out of fashion at the beginning of the 20th century. When we use the term rubato today, we usually mean something else: we refer to tempo fluctuations in musical events as a whole (i.e.: accompaniment and melody).

Because of this change in the meaning of the term rubato, it is difficult to apply Mozart’s statement about tempo to today’s musical practice. If, like Mozart, one cultivates a music-making practice rich in rubato, one would do well to regard the tempo as “the hardest in music” – because only by “hard” adherence of the accompaniment to the tempo can the upper voice develop its full freedom.

However, when rubato is no longer part of the musician’s DNA – as it is today – I think it is legitimate to interpret a piece of music even through minimal tempo variations. The “stubborn”, steady tempo is then only a special case.

Menotti: How To Become a Successful Composer

Samuel Barber – On the Intelligibility of Music