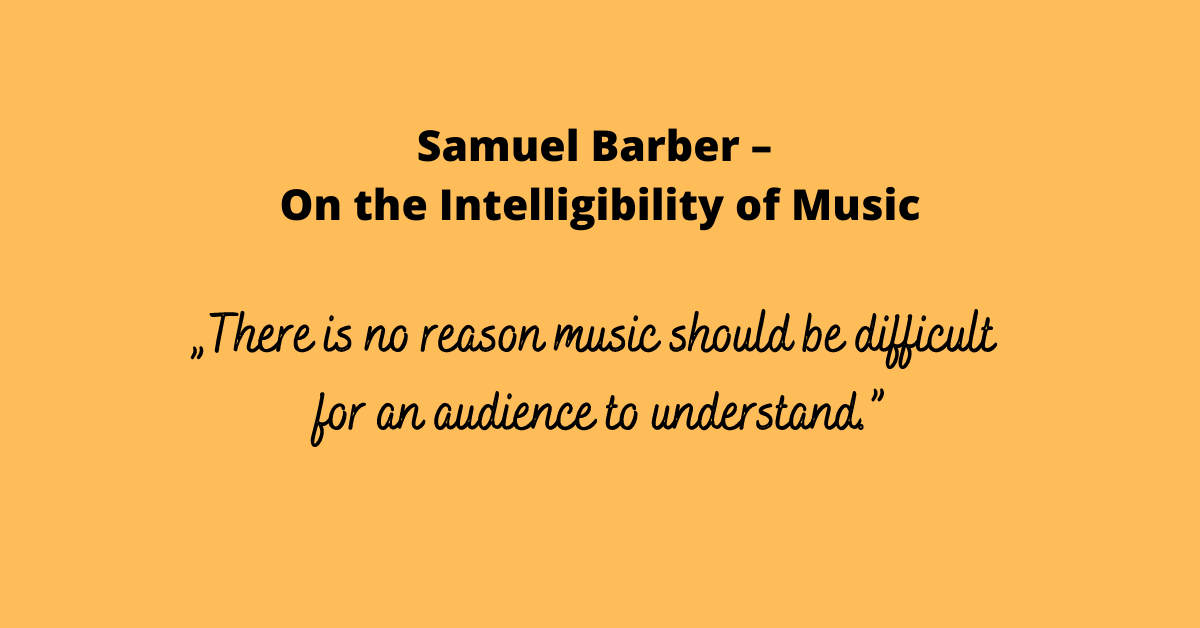 Is music something intellectual? Or something for the “broad masses”? You may have a clear opinion about this. However, generations of composers have argued about this question – and are still arguing today. The US composer Samuel Barber (1910 – 1981) is one of the few who took a clear stand.

„There is no reason music should be difficult for an audience to understand.”

Who was Samuel Barber?

Samuel Barber began composing when he was seven years old. He received his professional musical training at the Curtis Institute of Music in Philadelphia – then, as now, one of the top addresses when it comes to musical education in the USA.

You have probably heard Barber’s most popular piece, the Adagio for Strings. Few know, however, that this famous piece is “only” an arrangement. Barber arranged the second movement of his String Quartet in B minor for the larger instrumentation of the string orchestra. Arturo Toscanini, one of the leading conductors of the 20th century, was responsible for the premiere of the arrangement in 1938.

It is a pity that the overwhelming fame of the Adagio for Strings has almost completely eclipsed Barber’s other compositional output. Yet Barber created other impressive works: his opera Vanessa, for example, was premiered 63 years ago today at the Metropolitan Opera in New York.

If you are a regular visitor to the StarkConductor Blog, you will have noticed that the quote from Samuel Barber…

„There is no reason music should be difficult for an audience to understand.”

…is related in content to the quote from Gian Carlo Menotti recently presented here. Both Menotti and Barber favoured more traditional forms and harmonies in their compositions, eschewing the experimentalism prevalent in the composer scene at the time.

Oh yes – there is something else that connects Barber and Menotti: they were life partners. 😊

While Barber postulated that music should not be difficult for the public to understand, Menotti took the criticism from the ranks of his fellow composers with humour. They both took the position that music must be accessible to the “broad masses”.

From the performer’s point of view, I might add that, in my opinion, it should always be the task of the performer to make it as easy as possible for the audience to access the music – regardless of the nature of the music. This is where I see one of the most crucial functions of performing musicians – we are not only “sound sources”, but above all fulfil an important mediating role.

Menotti: How To Become a Successful Composer