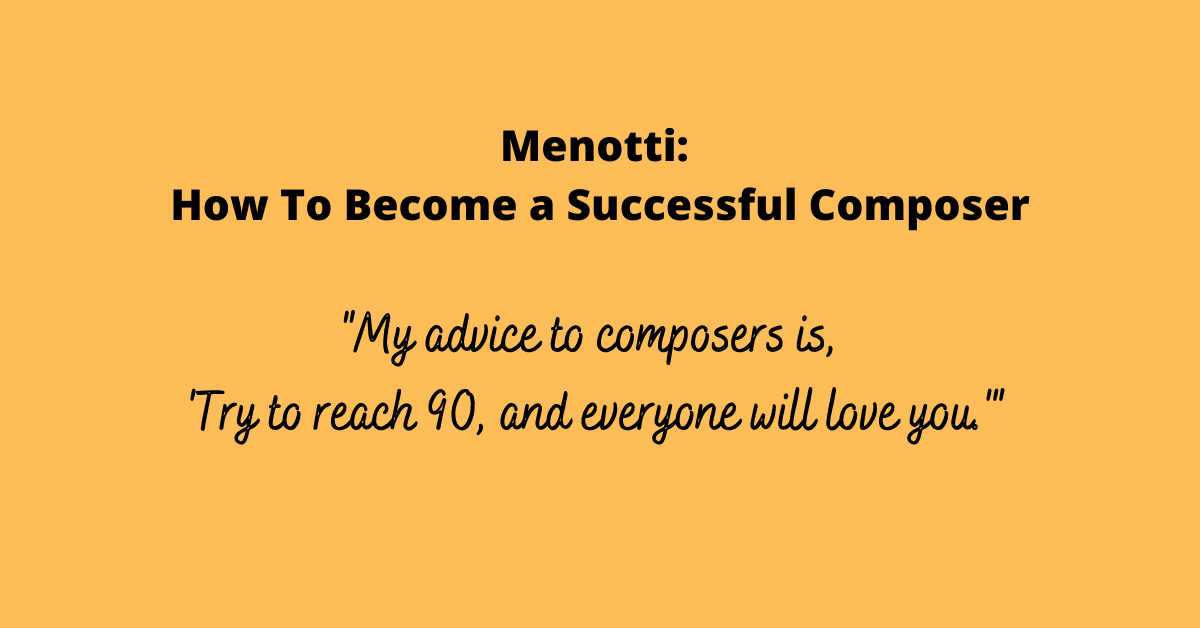 How does one become successful as a composer? Very simple, says Gian Carlo Menotti: wait until you are 90 years old.

My advice to composers is,
‘Try to reach 90, and everyone will love you.’

Who was Gian Carlo Menotti?

When Menotti’s musical style is discussed in professional circles, sooner or later the term “traditionalist” is usually used. In the strictest sense of the word, this means that Menotti did not follow all compositional trends in “mainstream” new music between 1950 and 2000. He stuck to major/minor tonality and more classical-romantic structures.

It is regrettable that the designation “traditionalist” is often accompanied by a pejorative judgement of quality. I consider Menotti to be an extremely capable composer with a fine sense of dramatic progressions (which is particularly important in opera). If you want to laugh, take a look at Menotti’s one-act opera The Telephone – this short opera (with only two roles) is in my opinion a masterpiece of musical entertainment.

New music needs time before it is accepted

Menotti knew the feeling of being unpopular – as early as the 1960s his music was repeatedly described in reviews as “sensationalist and weak”. As a connoisseur of music history, Menotti obviously took it with a great deal of humour:

My advice to composers is,
‘Try to reach 90, and everyone will love you.’

Menotti alludes here to a phenomenon that can be observed throughout the history of music: New music needs time to be accepted by the audience. Famous in this context are the statements of Gustav Mahler, who wished to be able to perform his works 50 years later.

The phenomenon of the “frozen repertoire” can be illustrated with figures: The worldwide opera repertoire, for example, consists mainly of 35 titles that have been performed over and over again for decades. Not a single new opera is among these titles – so becoming a successful opera composer “overnight” is the exception.

Interesting: In the genres operetta and musical, things seem to be different. For example, Emmerich Kálmán’s operetta Die Csárdásfürstin (The Csárdás Princess) was a world hit immediately after its premiere in the Johann Strauss Theatre in Vienna. On the other hand, the operetta is even more concentrated on individual composers: the majority of the titles performed are by four composers.

Against this background, Menotti’s advice to the composers is not as winking as it might at first appear. Sometimes composers have only one ally – time.

Samuel Barber – On the Intelligibility of Music