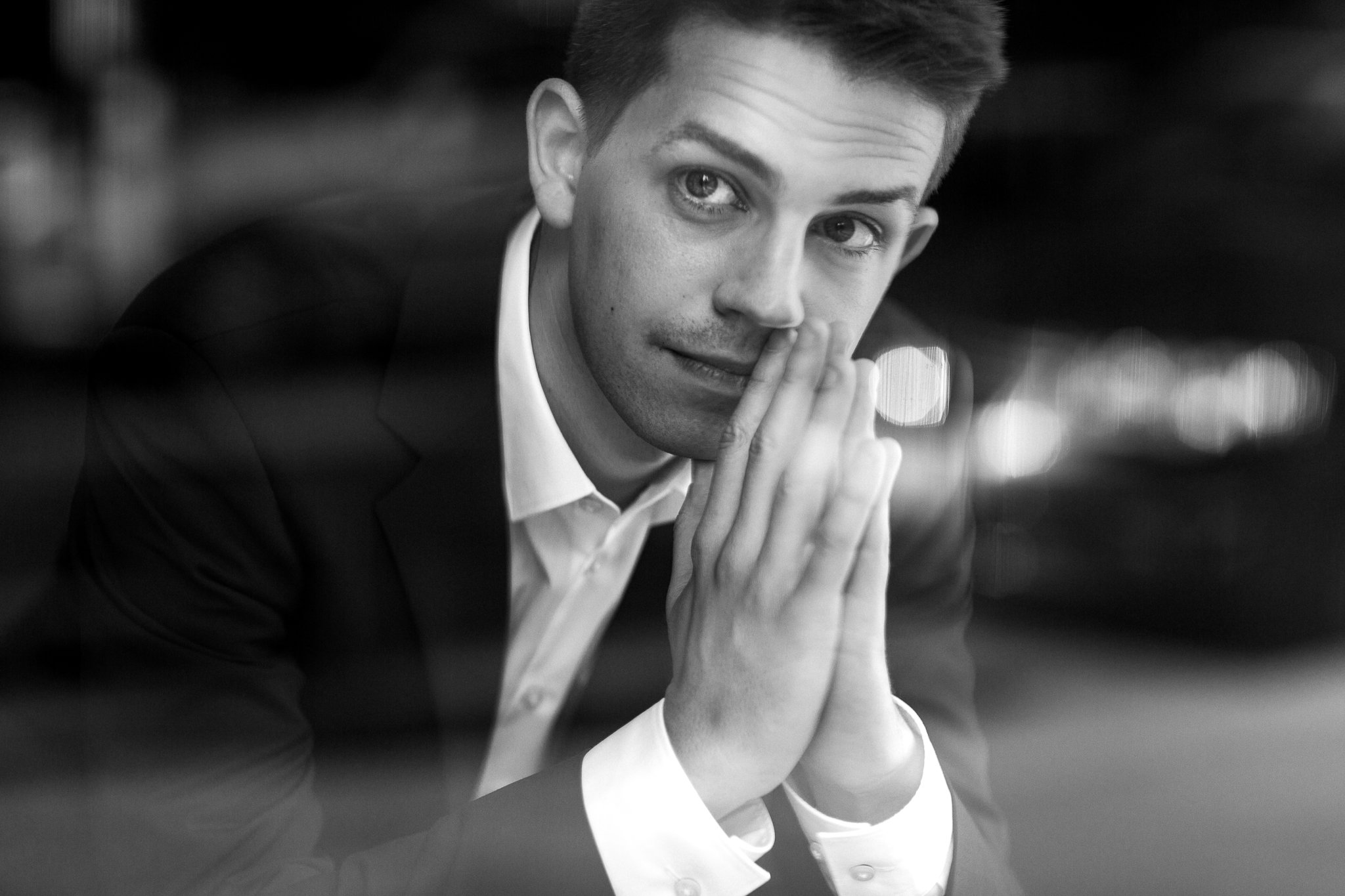 The pianist Pawel Markowicz has achieved what many soloists dream of – he is considered a specialist for a certain repertoire. Pawel’s focus is on the works of the American composer Philip Glass, whose Symphony No. 8 he arranged for piano solo in years of detailed work and released as an album in August 2020. In the StarkConductor Interview Pawel gave me an insight into his work.

Dear Pawel, the music of the American composer Philip Glass has been a focus of your pianistic activities for quite some time. How did your occupation with Philip Glass begin and how has it developed over the past years?

My first contact with the music of Philip Glass was through a film. I was 11 or 12 years old when my brother recommended Peter Weir’s The Truman Show to me. The soundtrack was written by Burkhard Dallwitz and Philip Glass. The music of two of my countrymen, Wojciech Kilar and Fryderyk Chopin, is also featured in the film. The simplicity of the compositions, which however create an enormous tension and atmosphere, had a strong effect on me.

Glass used the piano theme from the film in the middle movement of his Tirol Piano Concerto. With the support of Prof. Imola Joó, my then teacher in the piano preparation course at the University of Music and Performing Arts Vienna, I was able to study and perform this concerto at an early age. I began to listen to the numerous recordings of Glass’ music and took every opportunity to travel to a premiere or first performance in Austria or a neighboring country.

In recent years I have been fortunate enough to be able to perform many of Glass’ works myself. Some of my favorite concert experiences were the Double Piano Concerto 2016 in Hungary and the Austrian premiere of Philip Glass’ Piano Concerto No. 2 After Lewis and Clark 2019 at the Vienna Konzerthaus. The Symphony for Solo Piano is the work I have been involved with for the longest time. It represents my very personal approach to Glass’ music.

With your recently released debut album you have overcome a tremendous challenge. You arranged Philip Glass’ Symphony No. 8 for piano solo and recorded it. This symphony is considered one of the most complex works in the composer’s oeuvre. How long did you spend on the project and what were the hurdles you had to overcome during the development process?

Work on the Symphony for Solo Piano began in 2006, and it was more of an amazement than love at first sight. After the Austrian premiere of Symphony No. 8 in Innsbruck I was surprised by the density and complexity of the work. I felt like I was confronted with an exciting mystery and ordered the score.

At this point I was at the beginning of my piano and conducting studies. I wanted to play the piece, so I began to transcribe the first movement for piano – until I ran out of fingers and I helplessly declared the work unplayable. Nevertheless, I always came back after a few weeks or months, revised and continued to arrange.

Perhaps it is no coincidence that the Symphony for Solo Piano was recorded at the Lisztzentrum Raiding. During the recording breaks, the Liszt statue in front of Liszt’s birthplace reminded me that even great composers like him were concerned with translating an orchestral sound to the piano.

The challenge in arranging this symphony was the many simultaneously running patterns. They can be divided in the orchestra, but to perform them continuously on the piano requires a little finesse and sometimes a compromise. By superimposing several themes in the first movement, Glass weaves an energetic, iridescent texture, while in the second movement – a passacaglia – he sometimes goes in the direction of bitonality. Including the four-player percussion meant also assigning the triangle in the third movement a pitch on the piano.

While I completed this “Tribute to Glass” over the years, it was always important to me to remain as true to the original as possible and not to lose anything essential in terms of composition. Therefore, the biggest challenge – apart from the technical aspects – was to bring the piece to the point where it could be shown to the composer with a clear conscience. In total, about 14 years have passed from the first sketch to the release of the album.

(Pawel’s debut album Symphony for Solo Piano was released in August 2020 by Orange Mountain Music and is available on Apple Music, iTunes, Spotify and Amazon Music).

In addition to works by Philip Glass, you also master those pieces that are generally considered part of the “standard repertoire” of the typical classical pianist – I had the pleasure, for example, to experience you as a soloist in Mozart’s Piano Concerto in D Minor K. 466 at the Vienna Konzerthaus. Since your repertoire covers a wide range of styles, I would be interested to know whether there are any “interactions” between the individual styles in your repertoire. To put it bluntly: Do you play Mozart differently when you have played Glass before?

It’s nice that you’re addressing Mozart’s D minor concerto, because I have a special connection to it. As one of my absolute favorite piano concertos, it was the first one that I conducted from the piano. That was a dream come true for me. This musical practice requires a special kind of interaction and attention. It is also very much in the tradition of the Viennese Classical period, where the division of tasks was not yet so strict and a musician could compose, play, improvise and conduct in a way similar to what you find in the jazz world today.

Through this approach to music from different directions one gains new perspectives. This is how I see the “interactions” you mentioned. I also enjoy the variety of being able to draw from so many different styles. I can play Mozart and then I only have to reach into the shelf to take Gershwin out. In between there are 150 years and an ocean, technology has evolved, society has changed, but Mozart and Gershwin’s emotions are basically the same. Both knew happiness and sorrow, the pleasure of a good meal or the sting of an icy drizzle.

I think Mozart would be highly interested in the musical developments of the modern age. Because we talked about Glass at length earlier: In the middle section of the second movement of Mozart’s D minor piano concerto, I always have to smile when the woodwinds have offbeat harmonies and the piano plays arpeggiated chords underneath.

Dear Pawel, many thanks for the interview!

(The next possibility to experience Pawel Markowicz live (despite Corona) is already on 05 December 2020 at 5 PM (Central European Time). Pawel will play works by Glass, Kurtág, Pärt, Cage and Hauer in a live stream concert). 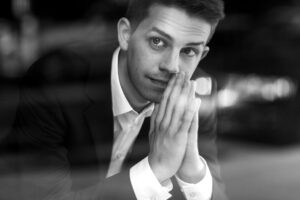 Pawel Markowicz has firmly established himself on concert stages both at home in Austria and abroad thanks to his extraordinary artistic versatility, which has seen him collaborate with musicians such as Andreas Ottensamer, Igudesman & Joo, Helene Fischer, Ensemble Kontrapunkte and Thomas Hampson. In 2020 he released his debut album SYMPHONY FOR SOLO PIANO, the world-premiere recording of his authorized arrangement of “Symphony No. 8” by Philip Glass. It was issued on the composer’s label Orange Mountain Music and reached #2 (Austria) and #5 (USA) on the iTunes Classical Charts. Recent highlights include performances at the Wiener Konzerthaus featuring the Austrian premiere of Glass’ Piano Concerto No. 2 “After Lewis and Clark” and Gershwin’s Rhapsody in Blue at Disney’s Fantasia “Live in Concert”. Markowicz’s excellent reputation has resulted in invitations to venues like the Musikverein Wien, Congress Center Villach, and the Hitomi Memorial Hall Tokyo. Furthermore, he has been engaged several times by the Concert Association of the Vienna State Opera Chorus as repetiteur for the Salzburg Festival productions.

As featured soloist, he has performed with the Savaria Symphony Orchestra, Wiener Konzertvereinigung, and the Max Steiner Orchestra, among others. He has directed the Akademisches Symphonieorchester der Wirtschaftsuniversität Wien from the piano and plays as an orchestral pianist with the ORF Vienna Radio Symphony Orchestra, for example at “Christmas in Vienna” since 2018. Further memorable appearances have included performances at the Musikwochen Millstatt, Laxenburger Schlosskonzerte, Wien Modern, an Asia tour as the pianist for the Wiener Singverein, and the Hungarian premiere of the Double Piano Concerto by Philip Glass.

Pawel Markowicz was born in Cracow and grew up in Austria. He holds a Bachelor’s degree in Piano Performance from the MUK – Musik und Kunst Privatuniversität der Stadt Wien, and has studied Conducting, Music Education and Composition at the Universität für Musik und darstellende Kunst Wien. In 2018 he earned his Master of Arts degree in Choral Conducting from the Kunstuniversität Graz. He has participated in renowned Summer Festivals like the Aspen Music Festival and School and the Hollywood Music Workshop. His artistic work has been supported through numerous scholarships, including four merit scholarships and the “Startstipendium” from the Austrian Federal Ministry for Education, Arts and Culture.

He has worked as a conductor for film music recordings such as Reinhold Bilgeri’s biopic “Erik & Erika”. Additionally, he has been Assistant Director for the “Hollywood in Vienna” TV Concert Recordings (since 2012) as well as for “Red Bull Symphonic” (2020), and serves as an editor for the publishers Doblinger and Universal Edition.