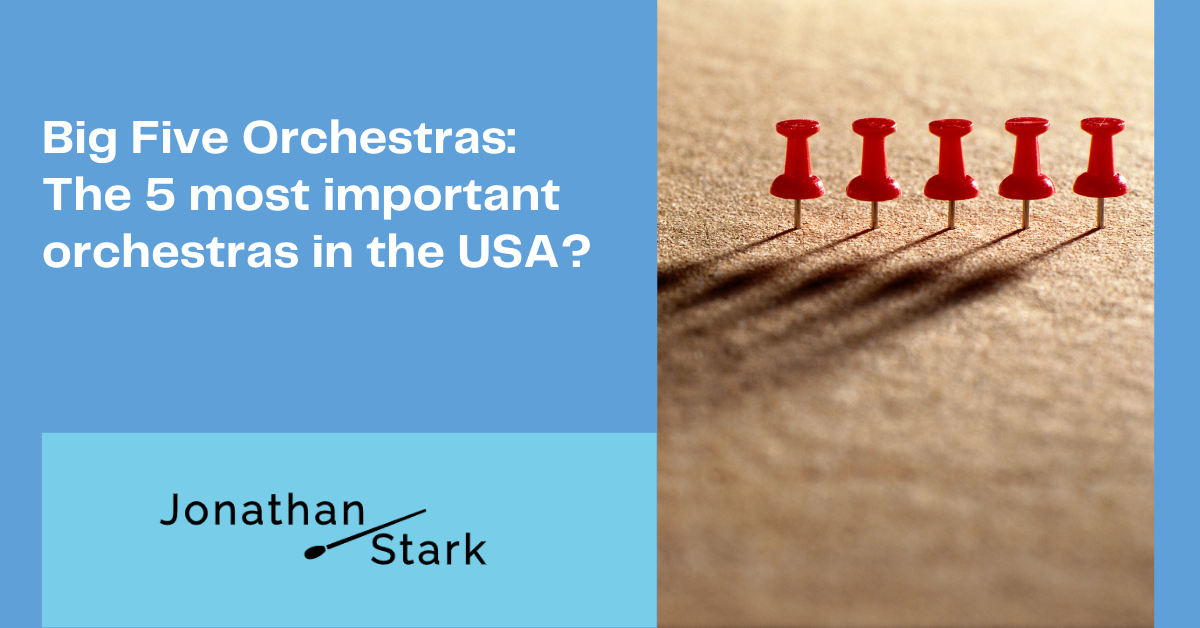 The Big Five orchestras are the 5 most important orchestras in the USA. These are the orchestras in New York, Boston, Philadelphia, Cleveland and Chicago. Whether this classification is still up to date, however, is disputed.

Before I go into whether the “Big Five” classification is still relevant at all, I would like to show you which orchestras are considered Big Five orchestras:

The New York Philharmonic was considered an engine of new music, especially between 1958 and 1977, when Leonard Bernstein and Pierre Boulez were the music directors in New York. Even Gustav Mahler was music director of this Big Five orchestra for two years!

The Chicago Symphony Orchestra is known for its characteristic brass sound. It was founded in 1891 by Theodore Thomas, the most important conductor in the USA at the time. Since then, one world star after another has been music director in Chicago, including Georg Solti, Daniel Barenboim, Bernard Haitink, Pierre Boulez and Riccardo Muti.

The term Big Five orchestra was coined in the 1950s. At that time, this classification was justified for the following reasons:

The Big Five orchestras were the orchestras in the United States that played the most frequent and longest concert tours – nationally and internationally.

The most important conductors in the USA at that time were the music directors of these orchestras, for example Fritz Reiner in Chicago and George Szell in Cleveland.

Finally, of course, money played a role: the Big Five orchestras had the highest annual budgets.

All of these points have changed over time. Numerous other American orchestras now undertake concert tours as extensive as the Big Five orchestras did in the 1950s; the Baltimore Symphony Orchestra and the San Francisco Symphony Orchestra, for example, should be mentioned here.

In addition, other American orchestras today are led by important conductors. Examples include Esa-Pekka Salonen in San Francisco and Gustavo Dudamel in Los Angeles.

When it comes to the budget, the changes are particularly evident: for several years now, the Los Angeles Philharmonic, which is not a Big Five orchestra, has been the best-budgeted orchestra in the United States. In past seasons, it was not unusual for the Los Angeles Philharmonic to have two to three times the budget of a Big Five orchestra. The Philadelphia Orchestra, on the other hand, was even insolvent for a short time in 2011.

The Big Five orchestras are debatable

I think it’s becoming clear that the classification of Big Five orchestras is debatable. To use Michael Mauskapf’s words, it is probably only a historical term.

It is clear that the Big Five orchestras like to use it. The term is well established, especially in the USA, and is likely to suggest a kind of “brand quality”.

In my opinion, it is important to note that the orchestras in New York, Philadelphia, Boston, Cleveland and Chicago are still among the best in the world. However, other orchestras have caught up considerably and now play in the same league.