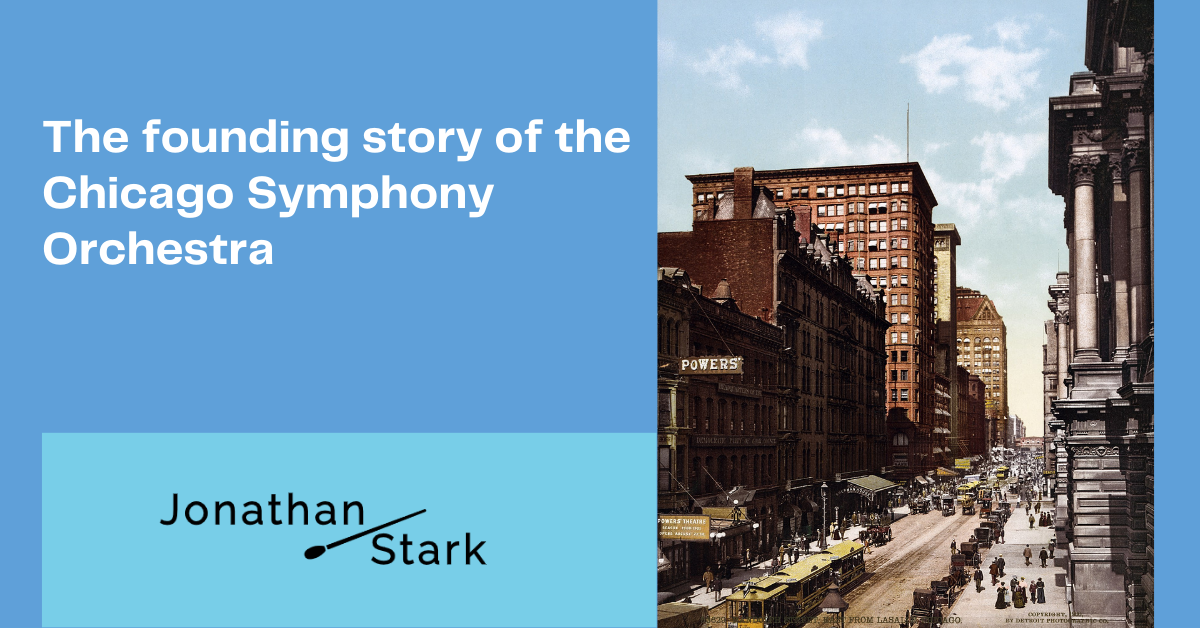 The founding story of the Chicago Symphony Orchestra does not begin in Chicago. Nor does it begin in New York, or even in America. It begins in a tiny town in northern Germany, where 10-year-old Theodor plays his violin.

Theodor closed his eyes and listened. There was only a splashing sound. The Benser Tief, the town river of Esens, flowed quietly toward the North Sea.

A breeze first caressed Theodor’s face and then made the strings of his violin vibrate. Theodor smiled. He loved his violin. He had started playing the violin eight years ago. At that time he had been just two years old.

Theodor was here often. He loved to play the violin at dusk on the banks of the Benser Tief. No one disturbed him here. All worries seemed far away.

Today he played Beethoven. Theodor’s father often said that Beethoven was the greatest composer of all time. Theodor, too, was fascinated by the dark beginning of the Coriolan Overture, which he now began to play. He threw himself into the long, low opening note, in order to attack the following short and loud chord all the more sharply. Three times in a row Beethoven prescribes this.

But something was missing. The power, the drama, and the darkness that would have been necessary for the Coriolan Overture, Theodor simply could not muster with his violin alone. If only he could hear this piece with a real orchestra just once!

Frustrated, Theodor set down his violin. His stomach growled. It was time to go home, where his parents would surely be waiting for him.

“…and that’s why we have to get out of here!”, Theodor heard his father shout as he closed the front door.

“But Johann,” his mother replied.
“You’ve been a town musician here for eleven years now. You’ve already changed so many things for the better!”

“It’s no use,” Theodor’s father replied.
“Everything is going much too slowly. Esens will never develop far enough to afford a decent town orchestra. It’s worst of all for Theodor. The boy needs an environment where he can make progress. He practices so diligently and yet makes no progress!”

When Theodor came into the kitchen, his parents looked at him. His mother smiled.

“Do we really have to leave Esens?” asked Theodor.

“Yes, Theodor,” his father replied.
“You see it for yourself. Ever since our mayor protested against the king four years ago, nothing has been going on in Esens. The king doesn’t like our town anymore.”

Theodor knew that the former mayor, Eduard Wedekind, with whom his father had gotten along very well, had even been punitively transferred four years ago. Eduard Wedekind had protested that the king wanted to repeal the basic state laws.

Christian, the son of the former mayor, had been Theodor’s best friend. They had spent long evenings at Benser Tief or playing music together in the mayor’s house. Christian was great at playing the piano. But those days were over. Christian had had to move away from Esens with his father and the rest of his family.

It was true that hardly anything had happened in Esens since the mayor’s family had been punished. Well, there was a new road leading to Wilhelmshaven via Ogenbargen, but so far Esens had hardly benefited from it.

Theodor had even played the violin for the king once. The king had been thrilled and had wanted Theodor to join the royal household. But Theodor had refused. He wanted nothing to do with a king who punished the family of his best friend.

“But where are we going to go?” asked Theodor.

“We have to go to America,” his father replied.
“To New York. There we have a chance as musicians. There’s even been a philharmonic orchestra in New York for three years!”

Theodor’s eyes lit up. A philharmonic orchestra! Maybe he would experience the Coriolan Overture with a real orchestra one day after all….