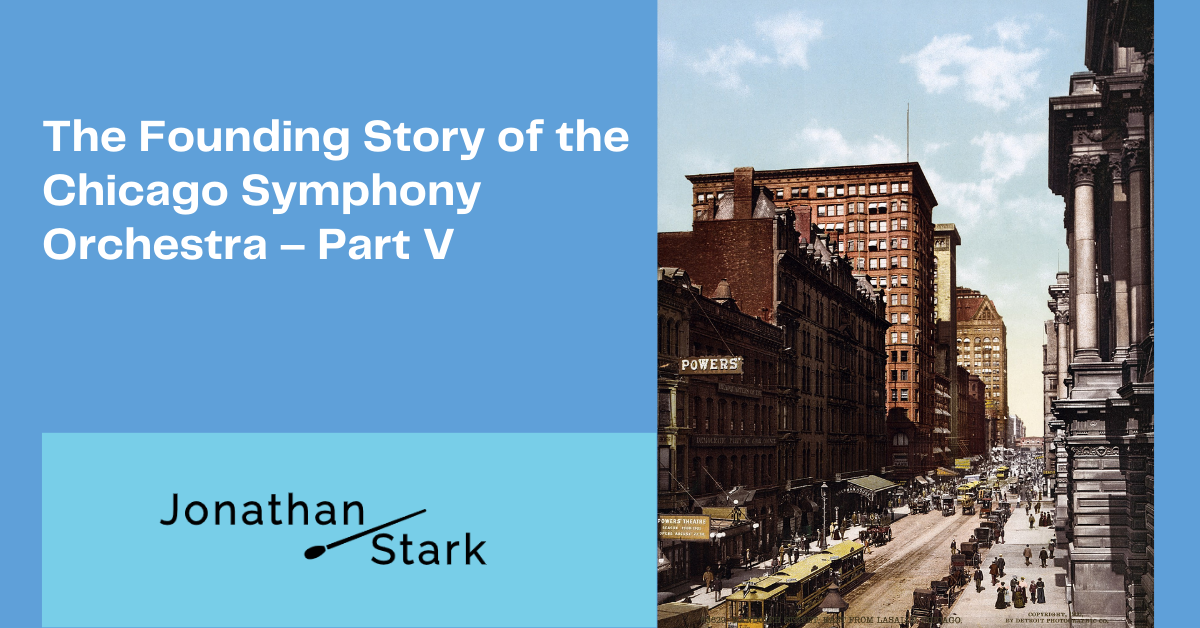 Theodor has written a letter to Charles Norman Fay asking for his support. The influential Chicago businessman’s reply changes the lives of Theodor, Christian and Vince….
(This is Part V of the founding story of the Chicago Symphony Orchestra. Part I can be found here, Part II here, Part III here and Part IV here).

“Go ahead and read, Theodor!”
Christian drummed his fingertips on the breakfast table.
“You’ve kept us in suspense long enough! Besides, you can’t stop grinning!”

Early that morning, the letter had arrived. Theodor had sensed that it must be the reply letter from Charles Norman Fay even before he had held the letter in his hands. So it had been. Of course Theodor had had to read the letter at once.

“Well then – listen carefully,” he said now, looking solemnly at Christian and Vince, who had come to his apartment as usual for Sunday breakfast. Then he began to read aloud.

Charles Norman Fay had not skimped on kindness. The letter began with Fay’s admiration for Theodor’s work over the past few decades. Then Fay went on to say that he was watching the orchestra deaths in America with concern. Even in Chicago, he said, there were only a few small orchestras left – a fact that Fay and his influential business friends were not willing to accept.

Theodor took a deep breath before reading the last sentence of the letter.
“‘Dear Mr. Theodor Thomas,'” – Theodor looked expectantly at Christian and Vince – “‘would you come to Chicago if we gave you a permanent orchestra?'”

There was complete silence in the kitchen. Theodore saw his two friends’ eyes go wide. Vince had just been about to bring his cup to his mouth, but had frozen in the motion. Christian sucked in a deep breath.

Then all three burst into cheers.

“Santa Madre di Dio!” Vince slammed his fist on the table, making the dishes clink.
“We did it! You did it, Theodor! We’re getting an orchestra!”

“Unbelievable,” Christian said, still staring at the table in disbelief.
“It actually worked!”

“I guess there are still people in Chicago who are willing to invest in culture,” Theodore said.
“We should get right to work. I’ve already arranged for musicians. Sixty colleagues from the former Theodor Thomas Orchestra are willing to come to Chicago with me to play the opening concert. Vince, you will be the concertmaster, of course. The question that remains is what we’ll put on the program.”

“Beethoven!” exclaimed Vince immediately.
“As a salute to your father. Imagine how proud he would be now. Take the fifth symphony. It fits the fortunes of the American orchestral scene.” Vince grinned sourly.

“That’s how we do it.” Theodore nodded with satisfaction.
“Off to Chicago!”

Theodor peeked through the artist’s door into the audience room. More and more visitors poured into the hall. The opening concert was sold out!

Theodor smoothed out his tailcoat and thought again about the past months. A lot had happened. Almost two years had passed between the first letter from Charles Norman Fay and today’s opening concert.

Bureaucracy made things move a little slower in Chicago, too. It was only a year ago that the orchestra association that Fay had founded had been able to meet for the first time. At that meeting, the date and program for today’s opening concert had also been fixed.

“Let’s go, amici!” shouted Vince, who was just coming down the aisle with Christian.
“Today is the first day of the American Orchestra Future!”

The three friends were now standing close together. No one said another word.

We understand each other blindly, Theodor thought.
That’s the way it’s always been.

The concert could begin.

Charles Norman Fay had taken the trouble to put Theodor, Christian and Vince up in his townhouse. So it was possible for the three friends to continue their breakfast tradition that morning in Chicago.

However, Fay’s breakfast room, with all its dark wood, seemed much more feudal than Theodor’s kitchen. Moreover, Theodor, Christian and Vince were seated in wide, soft armchairs, which – Theodor had to admit – were a bit more comfortable than his kitchen chairs after all.

“Amici, the concert yesterday was the greatest of my life,” Vince said, as he enthusiastically reached for the puff pastry.
“The atmosphere in the hall was simply incredibile. I still have goosebumps now.”
Vince shook himself.

“The press agrees with you, Vince,” said Christian, who was reading the newspaper, leaning back in his chair with his legs comfortably crossed.
“‘According to confidential information available to the Chicago Tribune, Theodor Thomas had been contracted to build one of the finest orchestras in the United States,'” he read aloud.
“‘Yesterday’s concert at the auditorium showed that Mr. Thomas has fulfilled his contract.'”

Christian and Vince looked at Theodor. He smiled sheepishly as Christian read on:

“‘Mr. Thomas has long been known for his ability to quickly enable newly formed orchestras to perform satisfactorily, but in this case he has outdone himself; the results are simply amazing. The body of sound produced is outstanding, possessing a vitality, a fullness and a volume never before heard from any Chicago orchestra.'”

“Maestro, congratulazioni.” Vince indicated a bow, careful not to bump his head on the tabletop.
“I told you so, the first day of the future! Now we can’t slack off, amici. How about a new concert hall for Chicago?”

Christian snorted.
“Modesty has never been your strong suit, has it Vince? What would you call the new concert hall then? Chicago Orchestra Hall?”

“Hmm… I was thinking more along the lines of Theodor Thomas Orchestra Hall,” Vince replied.
“Or how about La casa concerto dei tre amici?”

Christian shook his head with a laugh and threw a crumpled napkin at Vince.
“An Italian name for a concert hall in Chicago? No way!”

While Christian and Vince continued to argue passionately, outdoing each other with increasingly outlandish names for the new concert hall, Theodor closed his eyes and leaned back in his chair. He smiled. Only now did he feel the burden falling off him. He had made it. Classical music had regained a stage in America.

Theodor thought back to his childhood. Could he ever have dreamed that he would make it this far? He had been just a normal village boy. He had had nothing. Nothing except his violin.

For a moment, he felt as if he could hear the rippling of the Benser Tief again. He felt the gentle breeze on his skin again. Gratitude filled him. Gratitude for having been able to devote his life to music, for having found such a loyal friend in Vince, and for having met Christian again.

This was the five-part Summer Mini-Experience 2021: the story of Theodor Thomas, the founder of the Chicago Symphony Orchestra, who emigrated from northern Germany to America at the age of 10 to become the most important conductor of the 19th century.

Four classical music/opera mini-experiences are published each year. If you would like to be notified when the next Mini-Experience is released, please subscribe to my newsletter by entering your email address in the box below and then clicking the blue button:

You will immediately receive an email where you have to click on a link to confirm your email address. Only then will you be added to the e-mail list. Of course, you can unsubscribe from the newsletter at any time with a single click – there is an unsubscribe link in every e-mail.