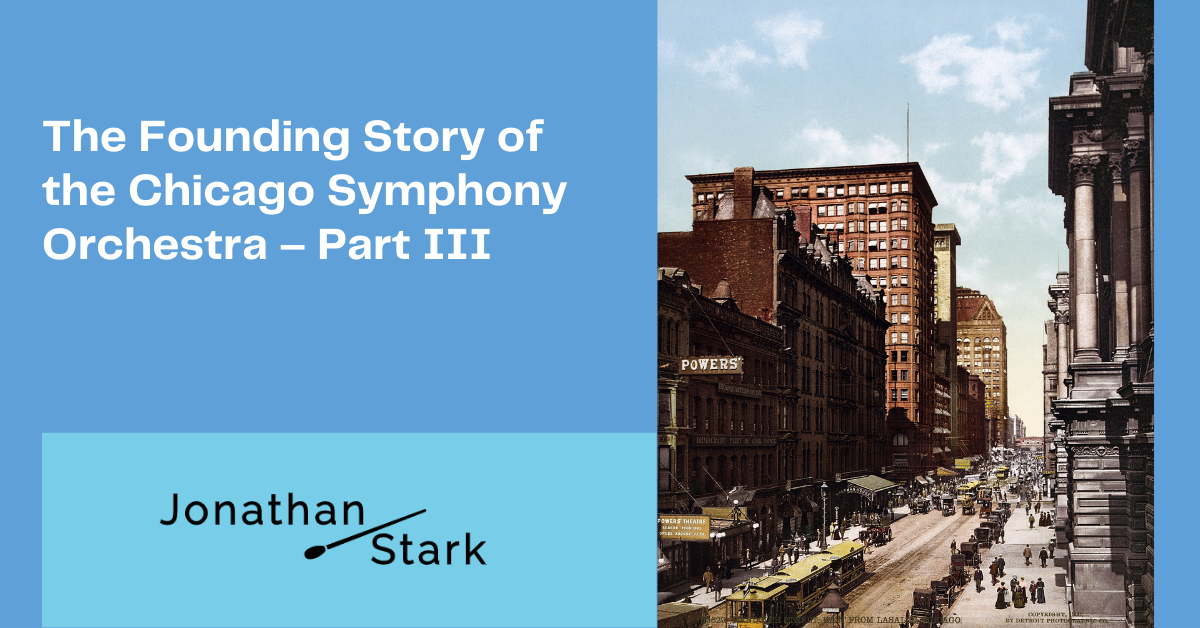 Theodor has been persuaded by Vince to come to the philharmonic concert. He does not want to miss Beethoven’s Coriolan Overture. Theodor does not yet know that the concert has many other surprises in store…
(This is Part III of the founding story of the Chicago Symphony Orchestra. Part I can be found here and Part II here).

Theodor let his gaze wander through the concert hall. It was filled to bursting. The philharmonic orchestra had earned a good reputation in recent years. This was also due to the work of Karl Anschütz, Theodor had to admit.

He saw men wearing tailcoats and top hats and women in elegant evening dresses. In the gallery, two families waved to each other – high society met at the philharmonic concerts.

Suddenly, Theodor was taken aback. A young man who was walking along the railing of the gallery looked familiar to him. The black hair, the serious expression on his face… Where had he met this man before? Theodor tried to look more closely, but couldn’t make out anything more. Then the man was gone.

Theodor was not sitting in the gallery. His seat was at the back right in the last row of the stalls. Vince had kept his promise and gotten him the ticket. For a good seat, however, his savings had apparently once again not been enough. That’s why Theodor was now sitting right next to the entrance to the hall, through which the last concertgoers were coming.

Theodor was still pondering where he knew the young man with the black hair from. As the orchestra entered the stage, Theodor decided to think about it later. Perhaps it would occur to him after the concert.

Tentative applause filled the hall. Theodor could see the woodwinds first because they were sitting somewhat elevated on the stage. He watched as the flutists, oboists, clarinetists and bassoonists took their places.

By now, almost all of the string players had also appeared on stage. Theodore watched as each musician went to his seat. All the chairs were occupied, except for…

Theodor frowned. That wasn’t possible. He let his eyes wander again from musician to musician, looking at each one very carefully.

Vince was not there.

“Amico“, it hissed behind him.

“Vince! What are you doing?”

Vince was standing in the foyer, peering into the hall through the hall door, which he had opened a crack.
“I’m trying to save our concert! Anschütz is sick!”

Theodor raised his eyebrows. All the rich people here in the hall who were expecting a first-class concert, the orchestra already seated on the stage… If the concert was cancelled now, it would be really expensive for the philharmonic society.
“And now?”

Vince rolled his eyes.
“‘And now?'” he mimicked Theodor.
“You conduct, of course!”

“Me?!”
Theodor stared at Vince in horror.
“Vince, that’s impossible! I can’t just walk up to the podium and take Anschütz’s place!”

“Sure you can! The Stuttgart court conductor is your conducting teacher and the Coriolan Overture is your piece! So what’s the problem?”

“Vince, I really can’t. All those people… The musicians who don’t know me…”

“I know you, so that’ll have to do. This is an emergency, after all. Come on now! Anschütz’ baton is ready for you. The old man always leaves it in the artist’s dressing room.”

Theodor took a deep breath. All right. He would do it. He would go to the podium and save the philharmonic concert.

It was completely silent in the hall. Theodor stood on the podium and it was as if he could feel everything at once.

The expectant looks of the musicians who did not know him.

The skeptical looks of the audience at his back.

The beads of sweat on his forehead.

The tension of Vince, who looked at him intently, ready to start playing.

Theodore laughed. He felt as if he were in heaven.

Theodor could hardly save himself from congratulations. The concert had been a complete success. The audience had rewarded him with thunderous applause. Some had even come to the artist’s exit and had waited for Theodor when he had come out of the concert hall. Now Theodor and Vince stood in a small crowd outside the concert hall, taking in the cool New York autumn air.

“Amico, that was really fenomenale. My whole famiglia is thrilled with you. And so am I.”

Theodore grinned broadly.
“Thank you, Vince. After all, it wouldn’t have happened without you.”
He let his gaze wander over the group of people. Suddenly, he saw a man making his way toward him. Theodor immediately recognized the serious expression on his face and the black hair – it was the man he had seen in the gallery before the concert began.

What did this man want from him? Theodor convulsively tried to remember who he was. Perhaps a concert agent he had met on his tours with the string quartet? But the man was too young for that – he had to be about Theodor’s age.

In the meantime, the man had made his way to Theodor. To Theodor’s amazement, he grinned broadly as he looked at Theodor. Then he shook Theodor’s hand – slender fingers, Theodor thought.

“I knew it was you!” the man exclaimed.

And then everything was clear to Theodor. The black hair, the serious face, the age, the voice, the slender fingers – pianist fingers – it was Christian!

The two fell into each other’s arms.

“Christian!” exclaimed Theodor.
“How is this possible? What are you doing here?”

“Do you think your family was the only one to emigrate to America?” replied Christian.
“We had the same idea back then.”

Of course, that made sense. Christian’s family had fled the king’s wrath to another continent.

“Ah, the amico perduto of my amico!” exclaimed Vince, who had been watching the scene.
“Pleased to finally meet you. I’ve heard a lot about you!”

“You know what, amici? I think tonight was the beginning of something much bigger. Let’s spread classical music all over America! We are now a conductor, a violinist, and a pianist – it would be a laugh if we didn’t succeed…”