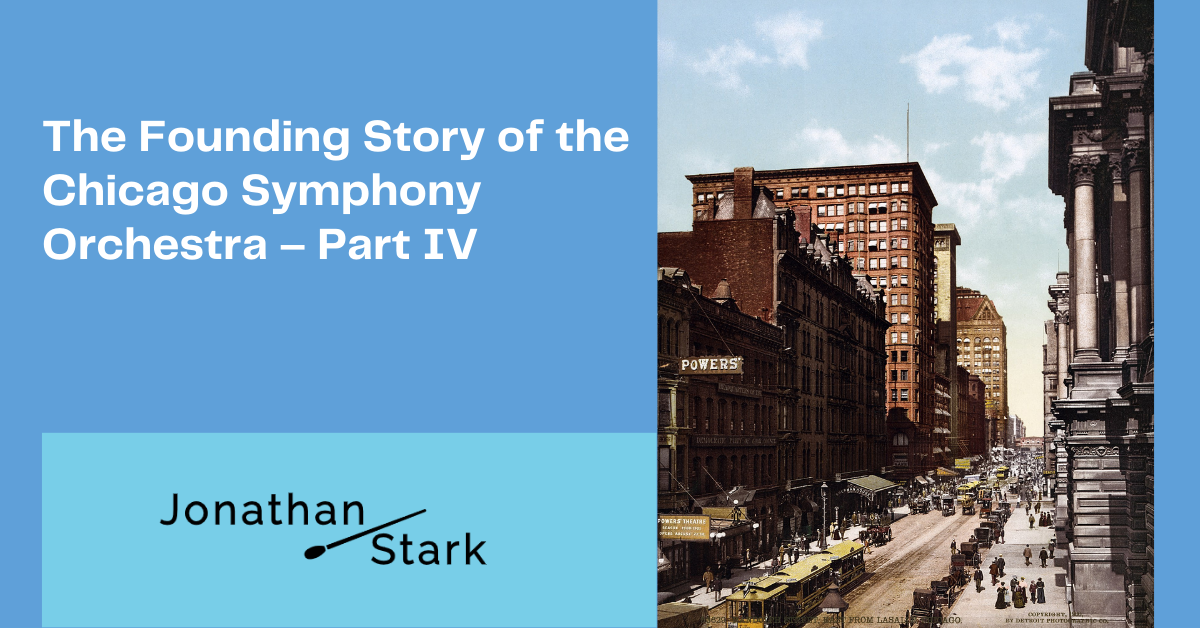 Thirty years after his sensational debut in New York, Theodor is a celebrated conductor – but his orchestra no longer exists. Over breakfast with Vince and Christian, Theodore comes up with an idea to save classical music in America….
(This is Part IV of the founding story of the Chicago Symphony Orchestra. Part I can be found here, Part II here and Part III here).

This tradition was sacred to Theodor. No matter how busy he was, every Sunday he invited Christian and Vince to breakfast at his apartment.

They had started this tradition almost twenty-five years ago. In the beginning, their Sunday breakfasts hadn’t happened every week because all three had often performed concerts around the country. Lately, however, the weekly rhythm had settled down, although the reason for it was not exactly pleasant….

“Another orchestra down!”, exclaimed Christian now, a slice of bread in one hand, the Sunday paper in the other.
“McAffrey can’t pay his musicians anymore. Have you read this, Theodor?”

Theodor nodded. That, too, was part of the tradition: as soon as they were gathered around the kitchen table, Theodor would divide the Sunday paper and pass one half to Christian. Later, they would swap the halves of the newspaper.

Vince, who never read the newspaper, reached for the bread basket.
“Amici, I wonder why it is that one orchestra after another dies. We were successful, weren’t we!”

“Well,” grumbled Theodor.
“In the beginning, yes. Not anymore.”

After Theodor had stepped in as conductor at the Philharmonic Symphony Society of New York nearly thirty years ago, his career had taken off. Together with Vince and Christian, he had toured every major city in America several times.

Because his interpretations were celebrated everywhere, he had even founded his own orchestra twenty-two years ago: the Theodor Thomas Orchestra. Vince had been his faithful concertmaster, Christian had shone again and again as a soloist.

What a lot they had put together! When they had given a series of evening concerts at Irving Hall here in New York, they had been compared with the famous orchestras of London, Paris, Vienna and Berlin. It had been just seven years since Theodor had put on a huge concert series with choir and orchestra. Almost 60,000 people had come to experience it!

All that was now over. The Theodor Thomas Orchestra no longer existed.

“You know, Vince,” Theodor said now, “we were flexible. We moved from town to town, and if there wasn’t enough of an audience in one town, we just moved on.”

“That was good for us, but bad for the cities,” Christian added, chewing on a piece of bread crust.
“No city is happy when five thousand people trample the park because an orchestra plays there once a year. It’s not sustainable.”

Theodore growled affirmatively.
“But as soon as you try to get a foothold in a city with an orchestra, you’re crushed by the cost. That’s probably what happened to McAffrey and many others. The rent, the fixed salaries for the musicians, the rehearsals…”

“…ah, sì! The rehearsals! You need a lot more of them because you have to play a different program every night!” Vince nodded.

It had been these costs that had also broken the neck of the Theodor Thomas Orchestra. After decades of touring, Theodor, Christian and Vince had wanted a permanent base in New York. But they had failed economically.

“Not quite,” Christian said, pointing to the article he was reading.
“Wacker and Birk report record profits. It’s incredible how far Charles Wacker has made it with his brewery. He studied in Stuttgart, did you know that, Theodor? In four years, he’s even slated to become the director of the Chicago World’s Fair.”

Vince’s eyes lit up.
“Ah, I love world’s fairs! Isn’t it grandioso when so many countries and people work together to create something great?”

Christian smiled.
“You’re right, Vince. Something as big as a World’s Fair can only succeed if everyone pitches in. I’m curious to see if in four years – Theodor, what’s wrong?”

Theodor sat motionless in his chair, staring at the kitchen table. Slowly he raised his eyes and looked first at Christian, then at Vince. Then his eyes widened.

“That’s it!” he exclaimed.
“We have to work together! That’s the solution!”

Vince and Christian gave each other a confused look. But Theodore was unstoppable:

“The industrialists have the money, we have the music! We have to combine the two! It must be possible to finance the cultural life of a city from the private sector!”

Christian nodded slowly.
“The industrialists would cultivate the image of their companies…”

“…and could also market their products directly to the audience!” added Vince.
“Beer from Wacker and Birk during the concert break!” Vince laughed and clapped his hands.
“È geniale!”

“Christian, you know the important people,” Theodore said.
“Who would you have to ask with a request like that? Who has money and loves culture?”

“You should probably find those people in Chicago,” Christian replied.
“That’s where most of the money is made. Charles Wacker’s brewery is there, too. I know Charles is very fond of culture, which should be true of his influential friends. The best person to write to is Charles Norman Fay. He is one of the most important businessmen in Chicago.”

That was the moment Theodor got up and rushed into his study to draft a letter….

What will Charles Norman Fay think of Theodor’s idea? Will he invite Theodor to Chicago? Read about that in Part V of the founding story of the Chicago Symphony Orchestra.