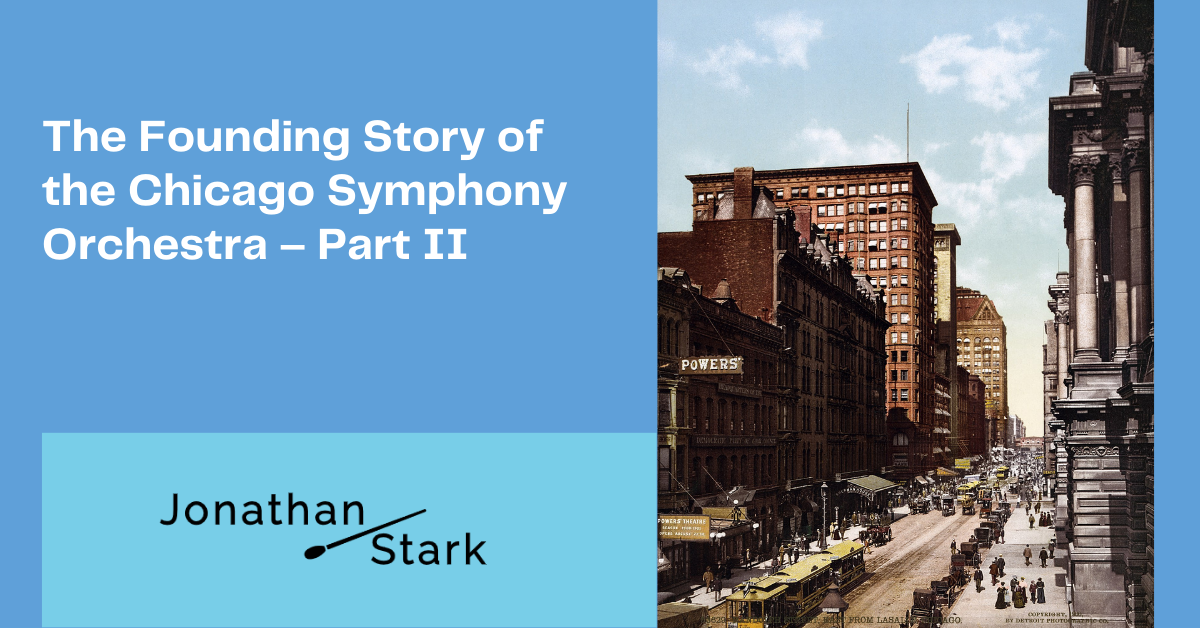 Theodor and his parents have decided to leave the Kingdom of Hanover and seek their fortune in America. In New York Theodor quickly finds a new home…
(This is Part II of the founding story of the Chicago Symphony Orchestra. Part I can be found here).

Theodor threw himself into the final chord with all his might. He had the feeling that his violin was glowing. Dust swirled in the orchestra pit. In the corner of his eye, Theodor saw his colleague, Vince, celebrating the final chord even more passionately.

The two had spent the last two and a half hours playing Donizetti’s Lucia di Lammermoor. Theodor loved to glance around the auditorium even during the final chord. There was hardly an evening on which the New York audience did not burst into storms of enthusiasm even before the final chord had faded away. And so it was today. The final chord was seamlessly followed by rapturous applause. As Theodor turned to face Vince, he looked into a sweaty but grinning face.

“Even after seventeen years in America, I still haven’t gotten used to how enthusiastic Americans are about Italian opera”, Theodor said as the applause died down and the first audience members left the theater.

“That’s because you’re North German, amico“, Vince replied.
He dabbed the sweat from his face with a handkerchief.
“You don’t feel the passion in this music. It’s different for us Italians. Whenever I play Lucia die Lammermoor, my entire famiglia comes to see the performance.”

Theodor nodded. Vince’s real name was Vincenzo and he had immigrated to America from Italy with his family ten years ago. Now Theodor had to smile as he saw Vince waving wildly to his parents, siblings, and cousins in the gallery.

“Maybe you’re right, Vince. My father idolizes Beethoven. No wonder I’m more comfortable with the German repertoire than the Italian.”

Vince had waved enough to his family and was now packing up his violin.
“I’ll let you in on a secret, amico. Whether it’s German, Italian or any other repertoire, it’s all about the same thing: listening. And you’re good at that, being such a great chamber musician.”

That was true. After Theodor and his father had eked out their first two years in America as stand-up violinists in bars and on warships, Theodor had later succeeded in forming a string quartet. With it he had quickly become successful in New York. For years he had toured all over America with the string quartet.

After a concert in New York, Vince had come to Theodor’s artist dressing room and raved about his virtuosity and warm tone. The two violinists had become instant friends. Since then, they spent many evenings side by side in the orchestra pits of Broadway’s small theaters.

“Thank you, Vince. I appreciate your appreciation. And I’m glad I got to do so much good chamber music in America. But there’s one thing I miss. I would give anything to be able to play with my friend Christian one more time.”

“With the mayor’s son who was run out of your hometown? How long has it been since you’ve seen him?”

“Almost twenty years. I have no idea where he is or if he’s still alive. My God, that boy could play the piano.”

Vince looked sadly at his friend. Then his expression brightened.
“I can’t tell you where your friend Christian is, but I can help you with Beethoven.”
Vince’s smile was now as wide as his face.
“I’ve been playing in the philharmonic orchestra for three months. I told you that, non è vero? Tomorrow night is our concert. And we’re playing – Beethoven!”
Vince burst into his infectious laughter, which shook his whole body. Then he looked at Theodor.
“You’ll come, won’t you? I’ll invite you, of course.”

“With Anschütz, the old time beater?”
Theodor screwed up his face.

The German conductor Karl Anschütz had come to New York five years ago. Theodor knew he was an important man. Anschütz had founded a German opera company in New York the previous spring and was in the process of building a music conservatory. Theodor thought all this was great – but he could hardly watch Anschütz conduct. He found his interpretations colorless, bland, and dry.

Vince winked.
“Yes, amico, with Anschütz. I know you don’t like him. Between you and me, he’s not easy to rehearse with either. He can get pretty angry. We’ve also had to cancel a lot of concerts because he’s often sick. Still, I’d like you to come to the concert tomorrow. I’m sure if I tell you what piece we’re playing, you won’t say no.”

Theodor looked at Vince skeptically. He didn’t know if it was a good sign that a suppressed fit of laughter was already making Vince’s body quiver again.

“What are you playing?”

Theodore’s eyes snapped open. For almost twenty years he had wanted to hear this piece with a real orchestra! Immediately he felt transported back to his childhood in Esens. As a ten-year-old, he had stood at the Benser Tief with his violin and imagined all the timbres of the Coriolan Overture.

Vince couldn’t hold back his laughter.
“I knew you’d like that!”, he exclaimed.

“I’m coming”, Theodore replied.
“You can count on it. It’s a good thing I don’t have conducting lessons tomorrow. Karl Eckert actually wanted to give me a lesson because he was supposed to be in New York tomorrow. But he had to postpone the trip because he has too much work with the court orchestra in Stuttgart.”

“I guess you still want to be a conductor, don’t you?”, feigned Vince.
“No wonder you don’t like Anschütz. He and your conducting teacher are completely different types. But I can’t wait to hear what you have to say about our Coriolan Overture tomorrow…”