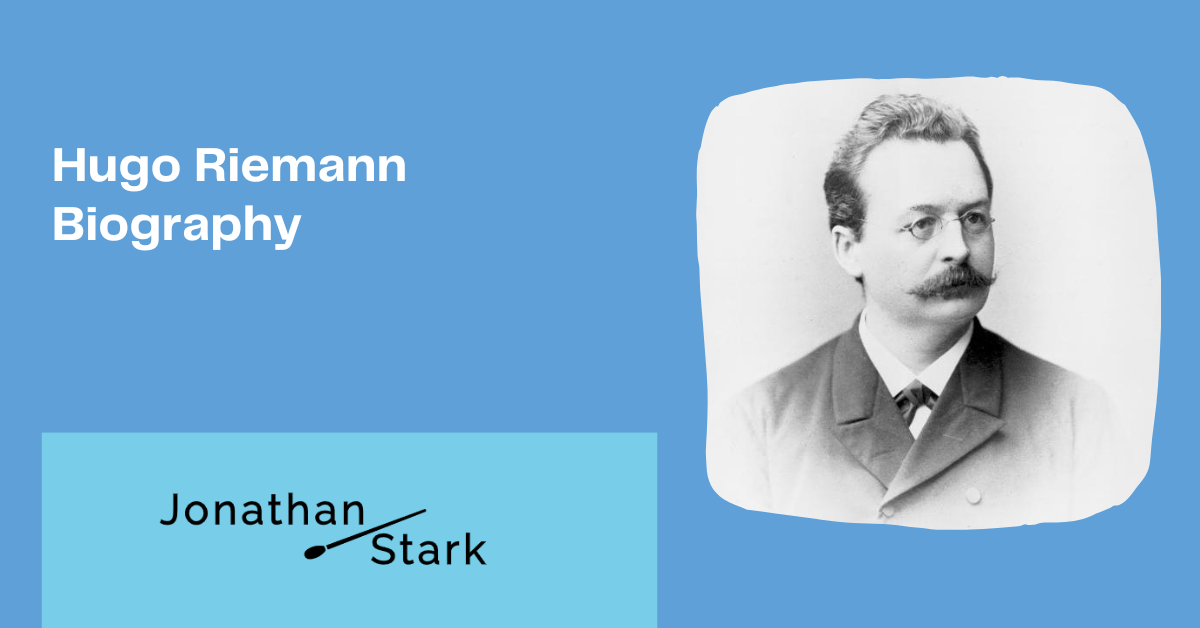 Hugo Riemann was born on July 18, 1849 in Großmehlra near Sondershausen (Thuringia). In the course of his busy life he was to become one of the most influential musicologists ever.

Note: Hugo Riemann is the main character in the Autumn 2022 Mini-Experience.

Riemann made his greatest contributions in the field of music theory. He developed a new method of harmonic analysis known as the “Riemann Theory of Harmony.” With his method, Riemann went a step beyond mere scales and keys by making it possible to make individual sounds MEANINGFUL. According to Riemann, every sound in a piece of music has a FUNCTION.

Basically, it’s about understanding which chords (= notes sounding together) fit together and how they interact to create the overall sound and effect of a piece of music. Riemann suggested that chords can be divided into different categories based on their FUNCTION (one could also say “task”) in the piece.

It is worthwhile to become familiar with at least the two most important functions: Tonic and Dominant.

The dominant is the chord that is in the greatest tension with the tonic. When you hear the dominant chord, you “feel” that actually only the tonic can follow. So the dominant “dominates” the musical action – hence the name. Very often, the dominant is an intermediate goal in a piece of music. Thus, a simple but very effective and correspondingly frequently used harmonic progression is tonic-dominant-tonic.

Riemann’s approach enabled musicians to better understand and interpret the structure and development of musical pieces. His ideas were taken up by many music theorists and composers and have influenced music analysis to this day. In the USA, for example, the “Neo-Riemannian Theory”, which is based on Riemann’s thoughts, is totally “in”.

In Germany, Riemann’s functional theory (in a form simplified by Max Reger, Hermann Grabner and Wilhelm Maler) was THE method of analysis par excellence for many decades. At general education schools it is partly still today, at university level its importance is decreasing today.

Of course, none of this was even remotely imagined when Hugo Riemann was born on July 18, 1849.

He did not grow up in a family of musicians, but music played an important role: Hugo Riemann’s father was a manor owner and senior civil servant. For a son from a good family, a musical education, especially in piano playing, was naturally part of the package.

An artistic career was therefore within the realm of possibility. Originally, Riemann wanted to become a poet, but that didn’t really work out. But Riemann also discovered his passion for music theory early on: his first articles on Richard Wagner and Gaspare Spontini appeared as early as 1870, albeit under the pseudonym “Hugibert Ries”.

Stupidly enough, it was just as natural for a son from a good family to go to war for the fatherland. Hugo Riemann did exactly that when he took part in the Franco-Prussian War in 1870/71. After that it was clear: only music.

Riemann went to Leipzig to study music theory, composition and music history. He was diligent and could have earned a doctorate early on, but his thesis was initially rejected by the Hegelian Oskar Paul. Riemann thus had to take an extra round: In 1873, he finally succeeded in obtaining a philosophical doctorate in Göttingen.

After that, however, professional success did not really set in: Riemann slaved day and night, wrote and published a great deal, and pursued several small jobs (as a piano teacher, choir director, etc…), but he did not receive recognition or a good income.

However, he met many central figures of musical life during these years, for example Johannes Brahms. Many composers of the young generation passed through Riemann’s lessons, for example Hans Pfitzner, whom Riemann encouraged, and Max Reger, for whom Riemann became a father figure.

Max Reger belonged at some point to Riemann’s family like a son. Later, however, there was a rift when Max Reger could no longer control his alcohol addiction.

It was not until 1901 – almost 30 years after his doctorate – that Riemann was appointed professor at the University of Leipzig. After four years as associate professor, he was upgraded to a full professor position in 1905 and had thus finally “arrived” professionally as well.

Riemann’s holistic teaching method was particularly groundbreaking: piano lessons, for example, should not simply be PIANO lessons, but comprehensive MUSIC lessons. This naturally includes considerations of articulation and dynamics, training of the ear, a precise idea of phrasing, and a detailed knowledge of music history.

Part of the truth, however, is that not all of Riemann’s ideas were received uncritically: In particular, his statements on musical nationality, harmonic dualism and phrasing have also brought him criticism. It must also be mentioned that there are cross connections to National Socialism. However, these do not concern Riemann as a person, but the Riemann reception. These cross connections were worked up in an EXCELLENT article by Ludwig Holtmeier (in German).

Although Riemann repeatedly applied for more prestigious posts in Berlin, Prague and Vienna, he was never appointed there. So he remained in Leipzig for the rest of his life, writing a lot, publishing a lot, and composing a bit.

Some of Riemann’s colleagues and students have described him as a very dedicated and influential musicologist. Arnold Schoenberg, for example, called Riemann “the greatest music theorist of his time” and often mentioned him as a great influence on his own work. Max Reger, too, had to acknowledge that Riemann devised a method for “understanding and appreciating the music of the 19th century that would otherwise have remained closed to us.”

When Hugo Riemann died in Leipzig on July 10, 1919, he left behind an extensive body of work that attests to his important role in musicology, music theory, and music education. He remains one of the most significant figures in music history, having pulled many important strings in the background.

Parlando: what is that?

Song Accompaniment: Become the Star of the Family Celebration