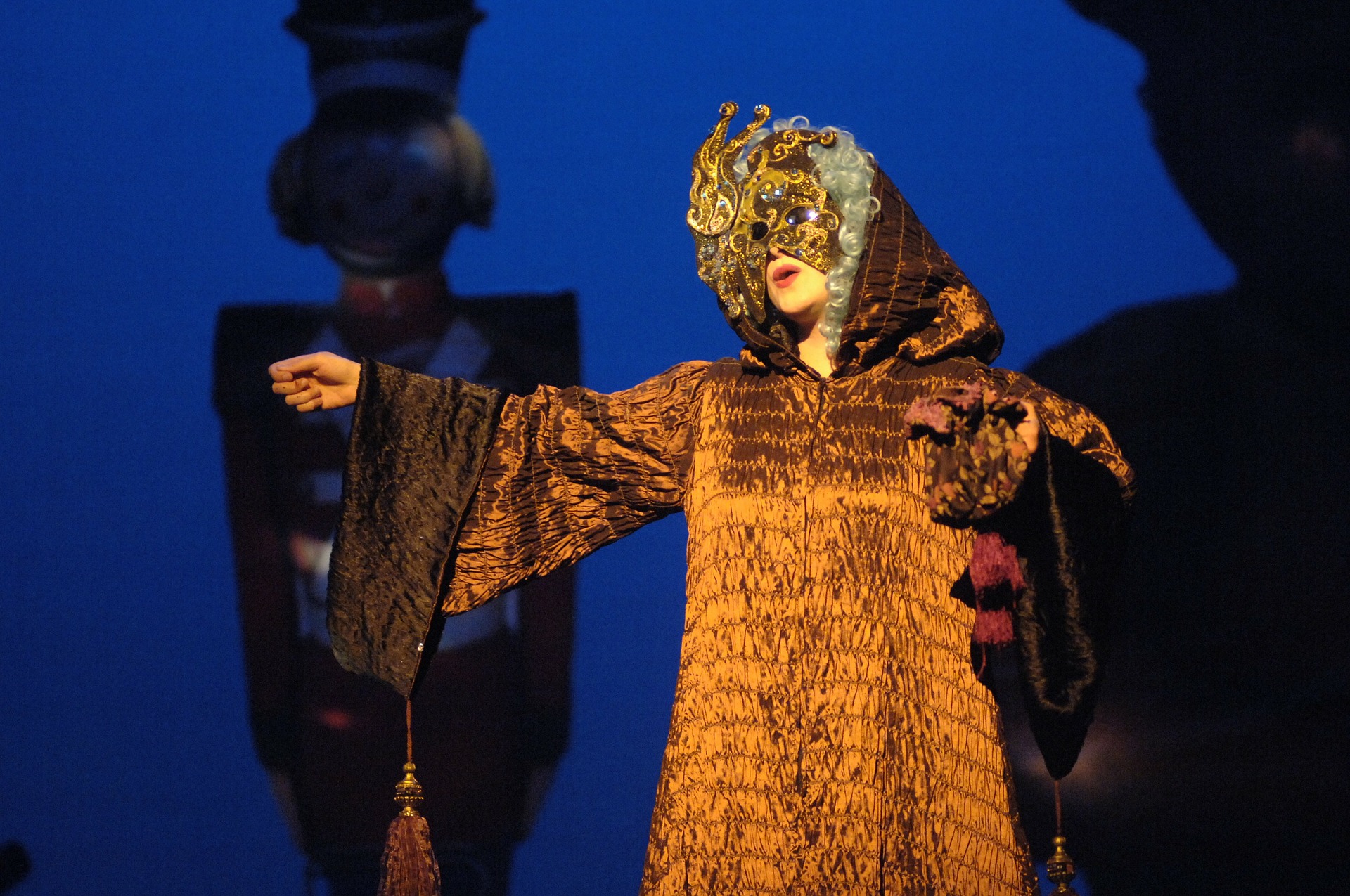 Singspiele were extremely popular in the opera houses of the 18th century. But what is a Singspiel anyway? Find out in this blog post.

You can also read why the middle class of the 18th century preferred to go to the Singspiel instead of the court opera, how Joseph II set up what was perhaps the first cultural funding pot of all time, and which Singspiele you absolutely have to know.

Have you ever thought about the relationship between the spoken word and the music in a stage work? Various models are conceivable here:

It may be a ‘through-composed’ work. In this case, there is not a single spoken word. All texts are musically realized.

It may be a work in which musical numbers such as arias, duets, or choral scenes are linked together by so-called ‘recitatives’.

In a recitative, the individual words are still sung and also accompanied by music, but the musical accompaniment is rather sparse. The performance of the text follows a more declamatory gesture.

It may be a work in which the musical numbers are connected by spoken dialogue rather than recitatives.

It may be a work in which there is only or almost only the spoken word. Music exists, if at all, only as background or interlude music.

Where is the Singspiel to be located? The Singspiel belongs to model 3, since it combines musical numbers with spoken dialog.

A definition for the genre Singspiel could therefore be:

"The Singspiel is a play with musical interludes."

You may be reminded of another genre by this definition – the musical.

That’s right. There are certainly overlaps between Singspiel and musical, but the two genres cannot be equated. This has to do with the historical development of the two genres.

While the history of the modern musical only began in the 1920s, the Singspiel has been around for a very, very long time.

The history of the Singspiel

To present the historical development of the Singspiel is not so easy.

Why is that? Because in the course of its almost 500-year history, the term ‘Singspiel’ has sometimes undergone major, sometimes minor shifts in meaning.

16th century: When in doubt, it's a Singspiel

The history of the Singspiel begins in the German-speaking area in the 16th century. To explain what was understood by a Singspiel at that time, let me make the following comparison:

If you go to church at Christmas, you know the nativity play. The Christmas story is staged, often accompanied by music.

More or less motivated children play Mary, Joseph and the shepherds, a baby doll lies in the cradle and this one fellow pupil, whom we all know and who is always bullied anyway, wears the donkey mask.

Now, something like that would have fallen under the term Singspiel in the 16th century! However, much more.

In the 16th century, a Singspiel was understood to be various forms of artistic performance,

The term ‘Singspiel’ was thus still quite unspecific in the 16th century, because in principle all theatrical performances that had any connection with music were subsumed under this term.

Around 1700: The middle class wants their own opera

Around the year 1700, a sharper definition of the term ‘Singspiel’ began to emerge. At this time, the middle class began to desire a musical-dramatic genre that differed from the court opera.

The Singspiel as middle class opera, so to speak. 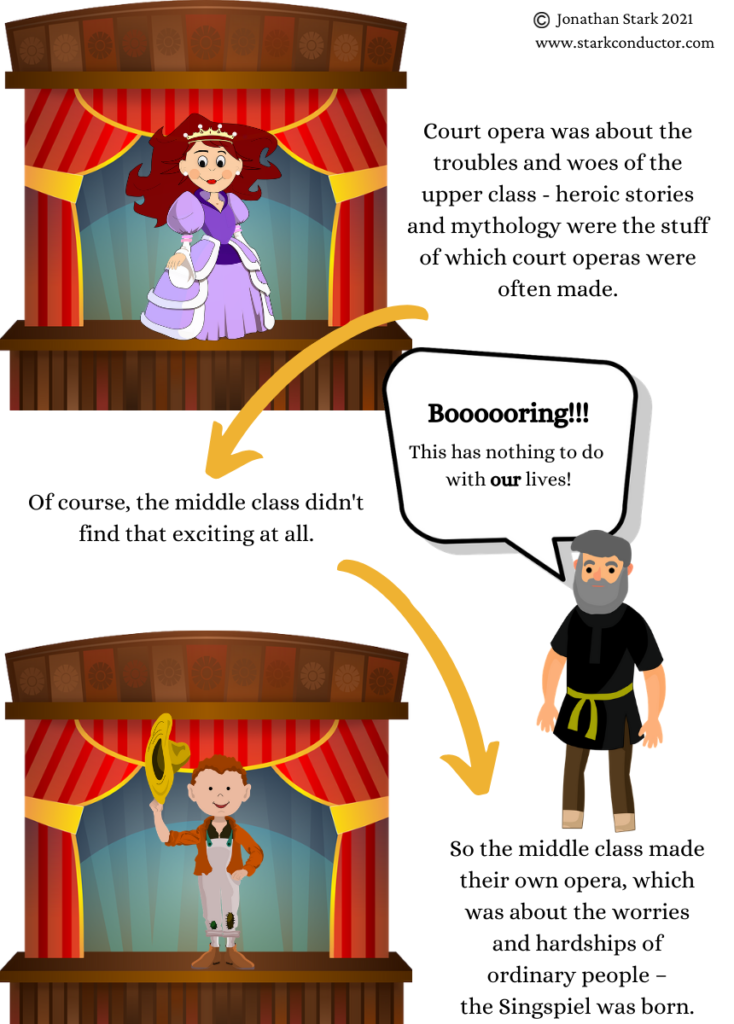 Now, how could this distinction from court opera be accomplished?

To get to the bottom of this question, we have to take a closer look at how court opera and Singspiel were designed around 1700.

Demarcation from the opera

Take another look at the four models of possible proportions between music and text that I presented at the beginning of this article.

In an aria, a single character in the opera is at the center of the action. This character gives you a glimpse into her emotional world: she may be lamenting her sorrow, she may be rejoicing, or she may be brooding.

So the aria is emotion-driven (opera nerds say ‘affect-driven’). The action stands still for a moment.

In the recitative, on the other hand, the action is driven forward. Often it can’t go fast enough – the singer conveys large amounts of text in a short time, and in a ductus that is very close to ordinary speech. A few harpsichord chords here and there as accompaniment – the recitative is finished.

Now, these typical opera forms were much too complicated for the middle class around 1700. It had to be simple, understandable and close to the people.

And anyway, these recitatives! You can’t understand a single word anyway.

The middle class faction had to admit, however, that the overall structure – i.e. the alternation between an element emphasizing the emotions, in which time ‘stands still’, so to speak, and an element that drives the action forward – works devilishly well dramaturgically.

It was therefore decided that there was no need to throw the baby out with the bathwater. The overall structure was retained, and these annoying arias and recitatives were simply replaced. With what? With songs – everyone knew them anyway – and dialogues – at least there one understood something.

A very simple structure of a single act of a Singspiel around 1700 and later could look like this:

On content: "We want to have something to laugh about..."

But it was not only formally that the Singspiel stood out from the court opera – the content was also quite different.

Do you know the feeling when you watch a television program that reinforces your opinion on a certain matter? Or when you read a newspaper article that exactly reflects your attitude?

Delightful, that feeling, isn’t it? There’s nothing like seeing your own positions reinforced in a certain public setting.

Well, it was no different in the 1700s. Court opera was consumed by monarchs and their court, and at most by the very top bourgeois upper class.

Of course, the main characters in court opera were monarchs, their court, and the very top bourgeois upper class.

Mostly, a court opera was about a monarch being confronted with a certain problem or even moral dilemma, which he then, of course, copes with in an exemplary, mild, wise, generous and generally inimitable manner.

That this was rather boring for the middle class, you should be able to imagine.

So, in the Singspiel, completely different contents were required: the life of the common people was shown on the opera stage, the life of carpenters, maids, plumbers …

Well, maybe only of carpenters and maids.

In any case, now in the opera house it was also allowed to laugh. The Singspiel is cheerful, funny and you go home exhilarated afterwards.

From the Opéra-comique to the Singspiel

The geographical starting point of this whole development was France, where the Singspiel was called Opéra-comique. These entertaining, funny and light pieces from France soon found a ready market in the German-speaking area as well…

…which was a thorn in the side of the Austrian Emperor Joseph II. His people were consuming French entertainment and having fun doing it! This was, of course, an untenable state of affairs.

So it came about that Joseph II, smart as he was, unceremoniously converted the French Theater in Vienna into the German National Theater in 1776 and henceforth massively promoted the production and performance of German-language Singspiele.

One of the best-known beneficiaries of Joseph II’s Singspiel fund was Wolfgang Amadeus Mozart.

Mozart, in fact, not only wrote wonderful symphonies, but in 1782, with the Emperor’s support, created the German-language Singspiel Die Entführung aus dem Serail (The Abduction from the Seraglio), which is still performed today, but in my opinion, far too little (it’s a brilliant piece!).

Joseph II’s efforts were successful: the German-language Singspiel became an important stage genre in the Age of Enlightenment, as it brought Enlightenment ideals to the people in an entertaining way (today, I think we would call this ‘infotainment’. So that’s exactly what I always try to do here on the blog

If this has whetted your appetite for Singspiel, why not listen to the works of the following five composers – they wrote great Singspiele!

Important: Of course, such a list of the ‘stars’ of a particular genre is always incomplete.