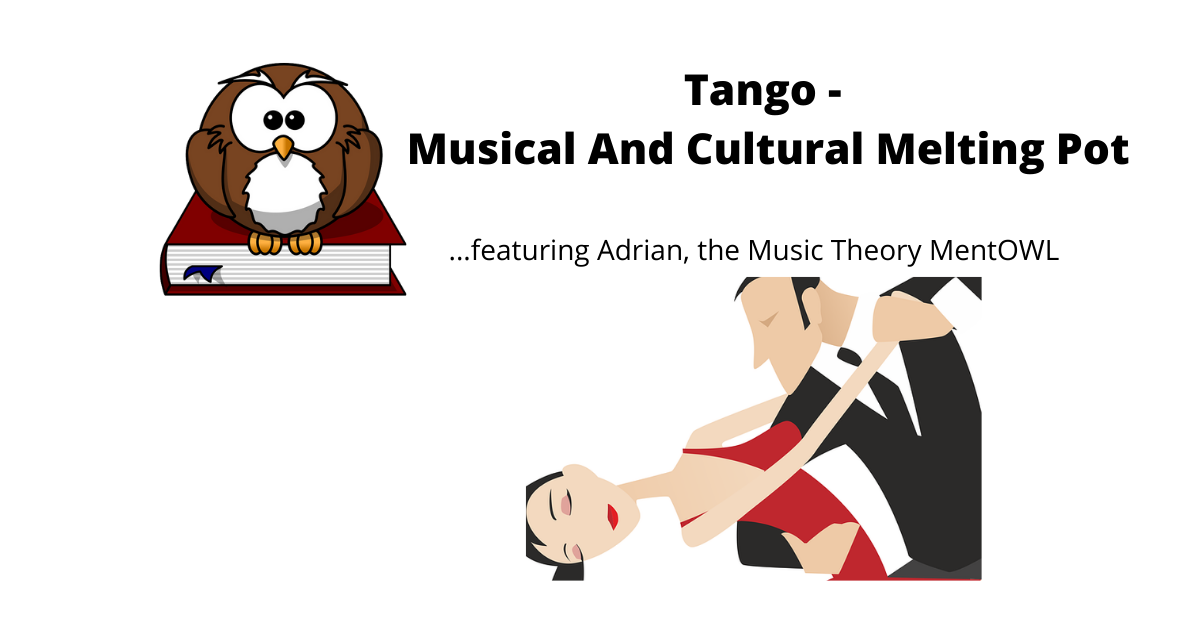 With the Tango, I finish together with Adrian, the Music Theory MentOWL, the mini article series on dance music. The Tango stands for Latin American temperament and is also becoming increasingly popular in Europe. What elements make up a tango?

It is time to prepare for the ball season. Do you want to show yourself from your best side not only on the dance floor but also in small talk? Then read the mini article series about dance music here in the StarkConductor Blog. In today’s fourth part: the Tango.

Let’s start with the music. It is comparatively easy to put the musical framework of tango into words: The Tango is a ballroom dance originating from South America in slow 2/4 or 4/8 time with a syncopated rhythm. (If this is Greek to you, you can read here in the StarkConductor Blog about time signatures and syncopations).

A musical example to illustrate this: The following piano tango was written by the Spanish composer Isaac Albéniz (1860-1909).

So now you know everything about this dance? Of course not. Adrian, the Music Theory MentOWL, is already fluttering excitedly.

“Tango exists in two different forms – an original and a modern one. The original dance form as well as the accompanying music are called Tango Argentino because they originate from Argentina and Uruguay. The modern dance form is a variation of Tango Argentino and is called International Tango.”

Adrian is right – as always. In order to be able to follow the development from Tango Argentino to International Tango, we have to take a trip together to Buenos Aires at the beginning of the 20th century.

Buenos Aires, 1895: The city is a cultural melting pot. Spurred on by a massive immigration program of the Argentine government, hundreds of thousands of immigrants flock to Buenos Aires – mainly Southern Europeans, Jews and Africans. Each immigrant group brings its own music.

The tango was not simply there – it developed from the clash of the different musical backgrounds of the individual immigrant groups. Imagine the emergence of the tango like cooking a stew – each immigrant group brings an ingredient (in this case: dances) from their homeland. Everything is thrown into a pot and thoroughly mixed – and there you have the Tango Argentino, the original form of the famous dance.

The Africans brought the Candombe, the Brazilians the Maxixe; the Poles added the Mazurka, the Bohemians the Polka. The Germans brought the Waltz and the Ländler, the Spanish and Cubans the Habanera.

Should you be confused by all these dances – don’t panic. You have certainly heard most of these dances before, you just have not made the connection with the associated terms.

May I give you an example? You have probably heard of the opera Carmen by the French composer Georges Bizet – it is one of the most frequently performed operas in the repertoire. And even if you don’t know Carmen, chances are that the following excerpt of the opera will still sound familiar to you:

What you have just heard here (possibly for the hundredth time in your life) is… a Habanera! Wasn’t so difficult after all, was it?

For the detailed explanation, I’ll hand over to Adrian as usual.

“A Habanera is a dance of Afro-Cuban origin, which is played in 2/4 time, whereby the first eighth beat is dotted. This slow dance, related to the tango, originates from Cuba’s capital Havana. It was developed in the early 19th century from the European counter dances.” 1

As you can see, the Habanera is already a further development of earlier dance forms, just like most of the other dances listed above. So the Tango has quite a big “family tree”.

(By the way: Have fun and listen to the first audio sample of this blog article again. The close relationship between Albéniz’s Tango and Bizet’s Habanera should quickly become apparent to you…)

From Tango Argentino to International Tango

Around 1910, travelers brought the Tango Argentino to Europe – to Paris, of all places, where the social upper class was considered particularly conservative. Now that you are well informed about the origins of Tango Argentino, you can imagine that the Parisian high society did not like this dance very much. In these circles, Tango Argentino was considered far too wild and also offensive.

British choreographers finally developed the solution to this unpleasant problem. To stick with the image of stew: What can you do if you want to get a person to eat a stew that that person doesn’t know? Sure thing. You have to combine the stew with something that is already known.

That’s how the British choreographers did it. They adapted the Tango Argentino stylistically to the already accepted ballroom dances. To put it a little more provocatively: they tamed the rawness of the original tango and pressed it into the form of the standard dances. The result: the International Tango, as it is still used today as a standard and competition dance.

That was the dance music miniseries!

This article was the last in the miniseries on dance music. Together with Adrian, I very much hope that you enjoyed the series. Now the ball season can come, because you are prepared for the dance floor (and the small talk next to the dance floor).

If you enjoyed the series, I would be happy if you subscribe to the StarkConductor Newsletter – this way you will always be well informed about new blog articles and upcoming article series.

Dynamics and Articulation: The 39 Most Important Terms in Music

Doctrine of Affects: what is that?